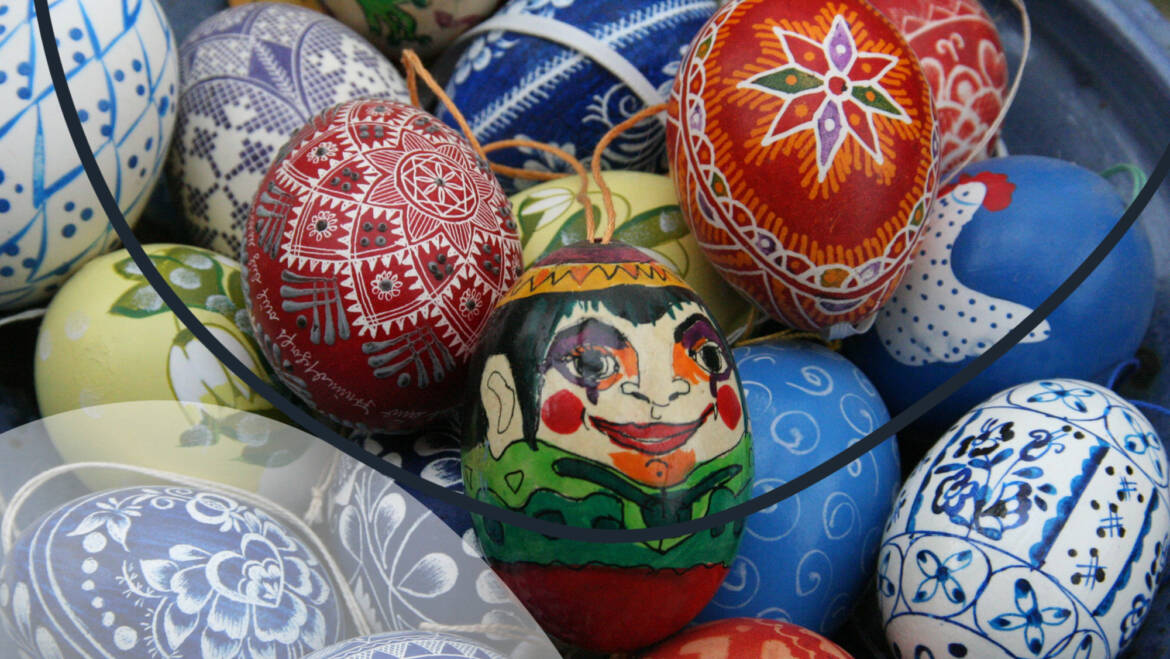 Nowadays Easter and Easter eggs go hand in glove, you just cannot envisage one without the other.  Whether the humble painted egg or the large chocolate egg variety, Easter eggs have come to epitomise Easter. But whereas Easter is a religious holiday celebrating Christ’s rising, it appears that the Easter egg is derived from pagan traditions.

Eggs may also have become a symbol of Easter for Christians, as during the period of Lent leading up to Easter, they abstained from not only eating meat but also eggs.

Hence the pancake fry-up on Shrove Tuesday, to finish up all the eggs before starting to fast the next day.  But it is interesting to note that eggs play almost no part in the Easter celebrations of Mexico, South America, and Native American Indian cultures.

Other religiously charged Easter treats include Hot Cross Buns, which have become a favourite pastry that is available virtually all year round.    Simnel cakes, is another speciality product identified with Easter, but unlike Hot Cross Buns is no longer makes much of an appearance.

Baobab as Easter food – the Gambian tradition of Naan Mburu

It will come as a huge surprise to many people that in West Africa, specifically The Gambia, Baobab, the fruit of the iconic African tree, has a special association with Easter.

Naan Mburu, a cross between a pudding and a porridge, is a special Baobab dish made in The Gambia specifically on Good Friday.  As a child it was explained to me that it was the Gambian equivalent to unleavened bread, (the bible tells us that this is what the Israelites ate on the very first Passover after leaving Egypt) but I could never see the equivalence.

True, a literal translation of Naan Mburu is ‘drink bread’ as naan means drink and mburu means bread, but one would need a good dose of imagination to visualise this as liquid bread!

As a child, on the morning of Good Friday, the whole family would descend on my grandmother’s house which would be buzzing with activity. The yard would be awash with helpers all busily involved in the different stages of making this ritual food.

The day before, fresh locally grown rice would have been washed, dried and then milled into flour ready to be steamed on the morning of Good Friday.

In the morning, the baobab fruit would be soaked in water to dissolve the pulp making it easier to remove the seeds. While one person would be steaming the rice flour in batches, another would be extracting the small black seeds from the baobab liquid with a sieve.

Two or three others would use 1.5m long wooden pestles, weighing at least 5kg, to soften the steamed rice, adding hot water and pounding it rhythmically into a soft mass.

For the finishing touch, the soft rice mass would then be worked into the baobab liquid. Sugar and water would be added, changing it to a thick creamy white baobab rice pudding which we the children could hardly wait to eat.

The sharing of food is an essential part of the bonding that holds communities together in many cultures, and the tradition of sharing Naan Mburu with family and friends is a good demonstration of this.

My grandmother would serve up Naan Mburu in food containers for us children to take to a long list of family friends.  My cousins and I would then carry these containers on our heads, carefully balanced on a tray or wrapped in a towel in a basket, with instructions to take them to Aunty Mary, Ya Awa and various other aunties.

And it would be like that for the rest of the day, going backwards and forwards until between 50 to 100 of my grandmother’s friends, relatives and neighbours had all received their share.

In other words, it was massive exercise in gifting; a ceremony of giving. However, this was all very reciprocal as my grandmother would also receive similar bowls of Naan Mburu in return.

I’ve tried to find out more about this tradition; when and how it started.  It seems to have been in force for a very long time indeed.

One of my cousins now in her 70s has told me that she can remember her own grandmother making Naan Mburu. However, in her day it was made as the food to be eaten on Good Friday, to break the Lenten fasting.

It was made using simple, locally available food – local rice, local baobab, sugar and water, for a special treat. What is interesting is how this has now evolved into a much wider practice for cementing friendships and relationships.

Naan Mburu is unique in that it is made by Christians at Easter to share with their Christian and Muslim relatives, neighbours and friends.

Tobaski or Eid Al Adhal commemorates the biblical event when Abraham proves his faithfulness to God and prepares to kill his only son Isaac/Ismael. But God produces a ram for Abraham to kill instead. In commemoration of this event, those Muslims who can afford to do so, kill a sheep and share the meat with friends, relatives and neighbours.

My grandmother would keep a list of all the people who had sent her presents of mutton at Tobaski so that she could reciprocate by sending us round to them on Good Friday with a present of Naan Mburu.   This is captured in the Krio proverb “hand go, hand cam”, ie he who gives also receives.

That was then, and now the pace of life has changed everywhere, the Gambia being no exception. As a child, almost all the people in my grandmother’s network lived in the capital Banjul within around 30 minutes’ walk from each other. We got to know the streets of the city as we criss-crossed from one end to another on our Naan Buru rounds.

I remember doing the Naan Mburu round, 15 years or so later with my cousin. This time we did so using her car as by now most people had moved from the island of Banjul and now lived in the Greater Banjul conurbation.

So we went from one house to the next with a very large container of Naan Mburu in the boot of the car this time doing the distribution round for my aunt.  When we got to the person to receive the Naan Mburu, we would ask them for a food container, ladle out the Naan Mburu, hand it over to them and then head on to the next stop. Different times required different actions!

Even though she is now her late 90s, my aunt still maintains the tradition of making Naan Mburu on Good Friday, albeit now for a much smaller number of immediate relatives, and neighbours. She continues to receive reciprocal gifts of Naan Mburu as well as gifts of mutton at Tobaski.

The giving and receiving of Baobab Naan Mburu at Easter is a practice that has been going on for at least a hundred years and is a firmly established tradition.

It shows how food and religion have been embedded in culture and play an integral in strengthening relationships, particularly between faith communities.