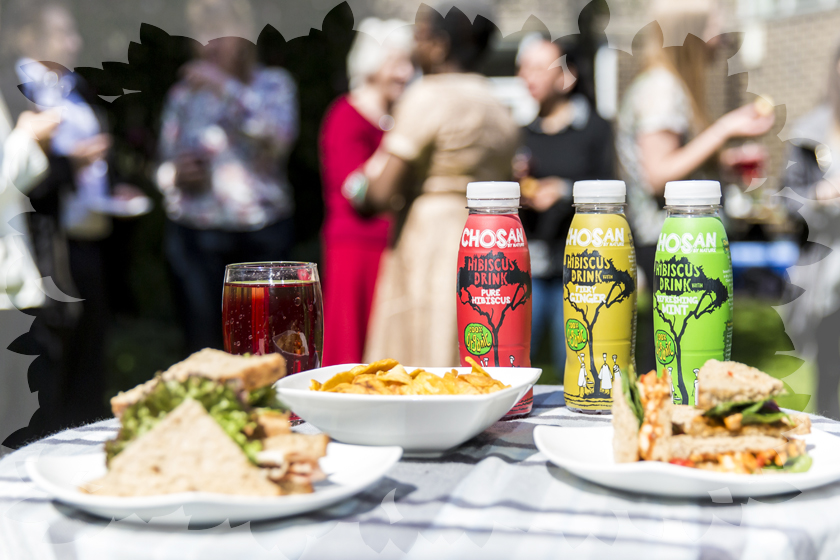 They say it takes a village to raise a child – and, it seems, the same can be said about creating a mouth-watering range of organic drinks.
Eliza Jones is the driving force behind Chosan, a selection of all-natural hibiscus and baobab drinks inspired by her childhood in the Gambia. After working hard for several years to get the products just right, she launched Chosan’s new rebrand at a garden party in her hometown of Colchester this week.
In attendance at the Quaker Meeting House in Church Street were friends who have supported her through the whole process, from having a simple idea to formulating flavours to creating marketing materials.
Among the guests were Debbie Appleton and Chris Ransom, who used to work with Eliza at a local charity before the Chosan founder was sadly made redundant. Debbie explained that Eliza’s determination to succeed with Chosan has been impressive to watch.
“It was something she’d always had in the back of her mind, and after she was made redundant she decided to give it a go,” she said. “Since then, she’s given it 150 per cent – she’s like a dog with a slipper!

“We’ve watched the drinks develop over the years, and she’s always run her ideas by us. I really like them

“We’ve watched the drinks develop over the years, and she’s always run her ideas by us. I really like them – they’re thirst quenching and perfect in all sorts of situations.”
Chris added: “Consumers are much more savvy than they used to be, and they want something like Chosan’s hibiscus drinks which are made of all natural ingredients.”
Claudia Garrey, who met Eliza when they were both selling goods at the town’s Trinity Café, was also at the event in the spring sunshine. Sampling a glass, she explained that the hibiscus drinks evoke nostalgia for her homeland of Mexico. The mother-of-two said: “We have hibiscus drinks all the time there; we’ll have a big jug on the table during a meal.
“So Chosan’s hibiscus drinks transport me back home. I have one at night instead of a glass of wine, and I much prefer giving them to my daughters instead of other soft drinks, because they are lower in sugar and calories.”

I think it’s great that she’s started the business from scratch and done it all off her own back.

For university student Mikaela Benson, the Chosan journey is one she’s borne witness to since the very start. “I’ve been friends with Eliza’s daughter Magano since primary school,” she said. “I was there when Eliza lost her job and started making the drinks, and have helped her sell them at markets in town over the years. I think it’s great that she’s started the business from scratch and done it all off her own back. I know Magano is proud of her.”
With a name that means ‘cultural heritage’ in Wolof, a local language in the Gambia, the Chosan range has four varieties – Pure Hibiscus, Hibiscus with Fiery Ginger, Hibiscus with Refreshing Ginger and Baobab Superfruit Drink. Eliza explained: “All of the drinks are completely organic, with no artificial colours or additives. Hibiscus has been used since ancient Egyptian times as a refreshing drink, and baobab is a natural source of vitamin C and potassium.”
She added: “It was wonderful to see so many good friends at the rebrand in Colchester. To have their help along the journey has been so beneficial for me and I’m very grateful to them all.”
The Chosan range of drinks is now on the shelves of numerous stockists up and down the country; see here to find the stockist page.

For more information about Chosan, call Eliza on

We're very grateful for all your custom and follow

We love this mugnut recipe using our baobab jams b